The church’s first pipe organ was a two-manual Hook and Hastings instrument dedicated on February 26, 1888, in the new Methodist Block three-story brick building located at the corner of 4th and Broadway in downtown San Diego.

When First Church moved in 1907 to a new building designed by Irving Gill and located at 9th and C streets, the Hook and Hastings instrument was enlarged by Murray Harris and installed in the 1500-seat auditorium.

In 1929, First Church dedicated a new 27-rank, three-manual Pilcher organ which included 1,877 pipes with harp and chimes. When the church moved to Mission Valley in 1964, the Pilcher organ was placed in storage. 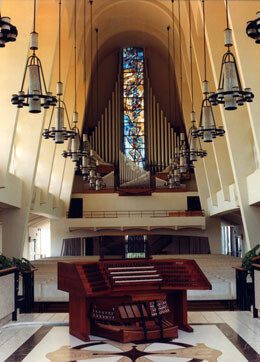 and installed a 12-rank, 855-pipe, instrument in the chancel. Four years later the former downtown organ was removed from storage, refurbished and enlarged by L. W. Blackinton and Associates to 41 ranks, with 2,450 pipes, chimes and harp, and placed in the rear gallery of the church sanctuary.

Throughout the decade from 1975 to 1985, then-organist/composer in residence Daniel Burton led a movement to provide the church with an instrument worthy of the architecture of the sanctuary and in keeping with the church’s history of supporting great music. In 1985 a committee headed by Jerry Ryan began to implement this vision, and in 1986 a contract was signed with L. W. Blackinton & Associates to redesign and expand the instrument, provide slider chests throughout, a four-manual console and 54 new ranks. The completed instrument was dedicated on January 22, 1989, with a total of 107 ranks and 6,042 pipes.

In 2010 an 8' Festival Trumpet was added, bringing the organ to 108 ranks and 6092 pipes in nine divisions. The specification includes three 32’ ranks, of which the Principal and the Bombarde are full length. The organ stands as San Diego County’s largest.

A two-manual, 14-rank, 849-pipe L. W. Blackinton and Associates Pipe Organ was installed in the Trotter Chapel and dedicated on September 12, 2010. 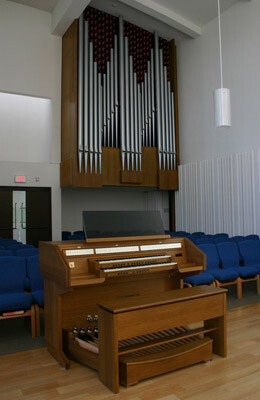 Tonal concepts and specifications for the organ were cooperatively developed by Organ Builder, Lyle Blackinton; Organist, Robert Plimpton (retired) and Music Director, Stanley Wicks. The challenge was to design an instrument of modest size to be used primarily for small services, weddings, and funerals, but in addition, would have the versatility to be used for other intimate musical events.

Planning for the chapel pipe organ began in 2003 when the organ builder worked cooperatively with architect Neil Larsen during the building design phase of the chapel complex. The success of every pipe organ is partially due to the acoustic environment in which it is placed. Neil and his consultants were able to provide an environment that is warm and friendly for the sound of the organ.

The organ pipes are placed in an elevated position at the rear of the chapel where the sound can “bloom” and “soar” above the heads of the congregation. The exposed pipes are actual speaking pipes from the low octaves of the 16’ Pedal Contrabass and the 8’ Great Principal. One hundred and fifty-six “Tongues of Fire,” inspired by the United Methodist logo, are displayed above the pipes on a grid to provide visual interest and to mask the internal working portions of the organ.

The organ has 14 ranks or 849 individual pipes that are playable from a low-profile, two-manual and pedal console. The combination action has 128  memory levels.

Tonal concepts and specifications for the organ were cooperatively developed by Organ Builder, Lyle Blackinton; Organist, Robert Plimpton and Music Director, Stanley Wicks. The challenge was to design an instrument of modest size to be used primarily for small services, weddings, and funerals, but in addition, would have the versatility to be used for other intimate musical events.

Inspiration for the tonal design can be found in small French “Choir Organs” that were typically found in the chancel of cathedrals, separate from the main organ and designed primarily for accompanimental purposes. They generally possessed an abundance of warm 8’ stops of different characters. To this foundation it was decided to expand the compass of certain ranks to provide additional brightness and flexibility. Independent mutations were also added to expand the texture of sounds available.

Notable features of the tonal design are as follows:

It was the builder’s desire that the organ through its scaling, voicing and tonal finishing would hopefully project a warm “joyful” sound to the listener.